No Result
View All Result

A Double-edged Sword – The Pros and Cons of Censorship 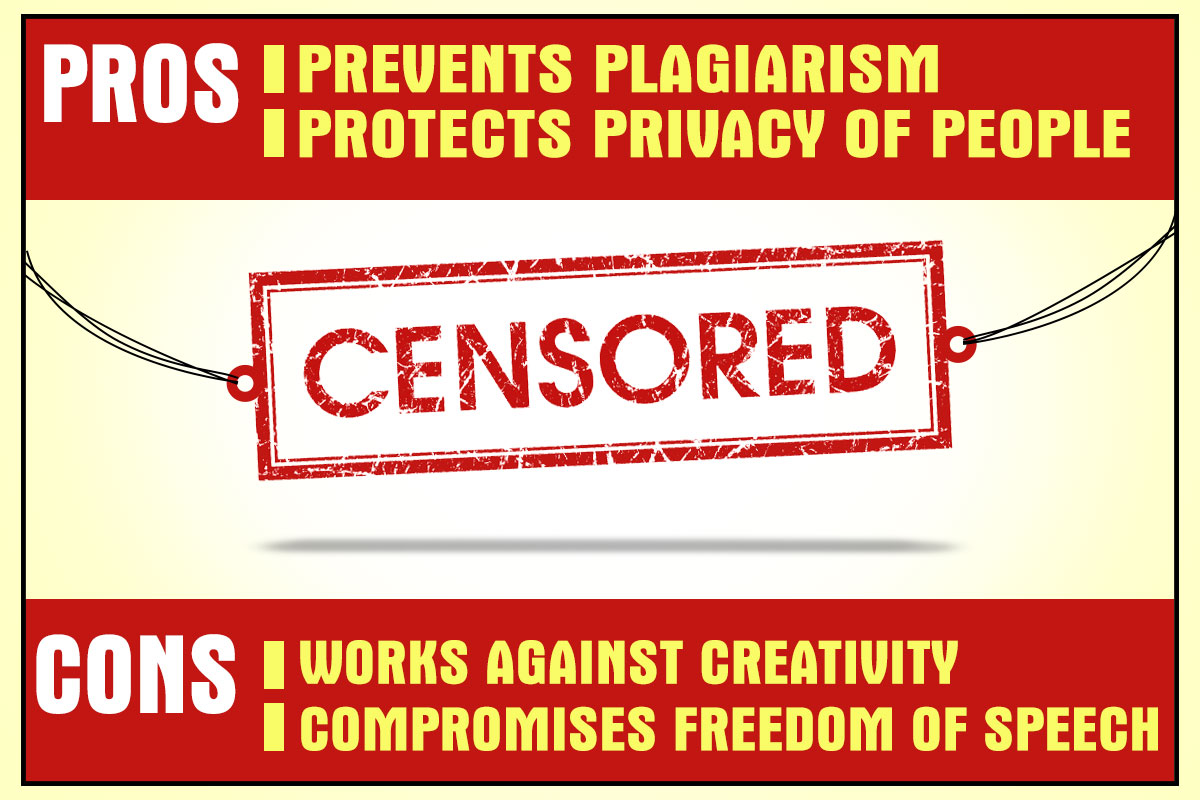 Censorship is the control of the influx of information and ideas in a society. Both democratic and non-democratic countries use it. With the explosion of communication technology, it has become all-pervasive. There is a dispute as to whether censorship is good or bad. It is applicable to programs on television, plays, movies, printed books, print magazines, video games and everything on the Internet.
Examples of Censorship
One of the very first incidents of censorship in movies took place in Hollywood in the year 1934, when a nude scene was snipped off from the film ‘Tarzan and His Mate’, as it violated the moral code back then. Even today films follow the modern MPAA (Motion Picture Association of America) code for censorship. During the 1950s, Elvis Presley appeared in one of the famous TV programs only to be shot by the camera till his torso; as his world-famous pelvic movements were deemed vulgar. Again during the 1950s, the Scientific American magazine published an article on thermonuclear fusion which was censored by the United States Atomic Energy Commission. The printed copies of the magazine were found and burnt as it contained classified information. During both World War I and World War II strict military censorship was laid on the freedom of press. A similar kind of censorship was also laid in India during the State of Emergency period in the 1980s. With the introduction of television and Internet, many important developments have taken place in the field of censorship around the world. A number of countries like Syria, Australia, Cuba, UAE, Yemen, Pakistan and Burma have censored the Internet. China has imposed stringent censorship regulations. A military censor was also laid on the freedom of press and Internet in Egypt lately. To protest against Internet censorship through PIPA (PROTECT IP Act) and SOPA (Stop Online Piracy Act), Wikipedia went on a 24 hour blackout. WikiLeaks, the sensational international whistle blowing website was closed down several times under the pretext of censorship. Satellite phones, Internet and freedom of press were also censored in Libya during Gaddafi’s rule. International press was not allowed in Libya. Exception to this rule was made only when the government invited them for the PR propaganda. Though some people claim that censorship curbs freedom of expression and right to information, others are of the opinion that it is a necessary evil. Censorship is not only used to control the flow of information but also to benefit the people.
Pros
Censorship does not mean restraining the expression of people, in fact it is imposed to protect them. 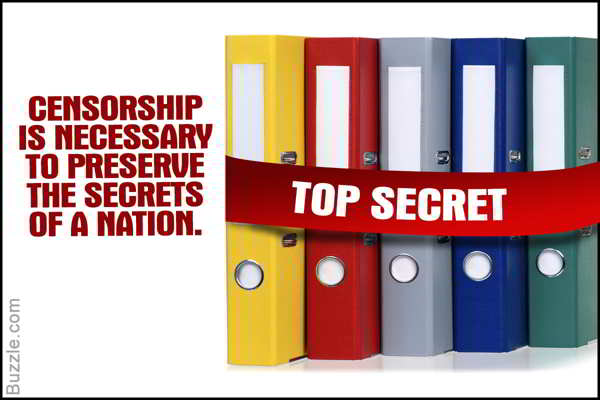 ▰ Censorship of pornographic material prevents the minds of children from becoming corrupt.
▰ Religious conflicts are avoided by the censorship of material deemed insulting or offensive to a particular religious community.
▰ It is useful in hiding sensitive military information, which could be used by an enemy state. 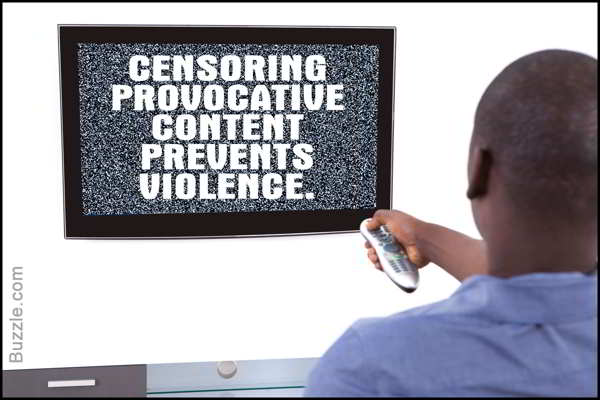 ▰ Censorship protects the privacy of people.
▰ Scenes of people consuming alcohol or smoking influence people to copy them. Hence, censoring such scenes serves a useful purpose.
▰ People may copy dangerous stunts shown on TV or movies. Censorship proves necessary here.
▰ Books may be used to portray wrong information about individuals or groups that could incite violence against them. 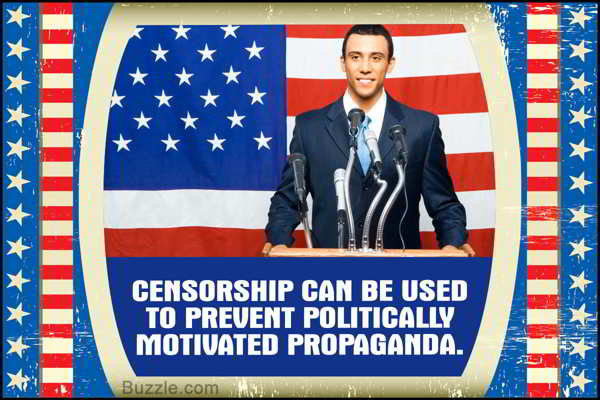 ▰ Plagiarism is prevented due to censorship.
▰ Abusive scenes in movies may offend some people. Censorship prevents that.
▰ It protects indigenous cultures from the bad influence of foreign cultures.
▰ It prevents the public display of disrespect to any particular individual or community. 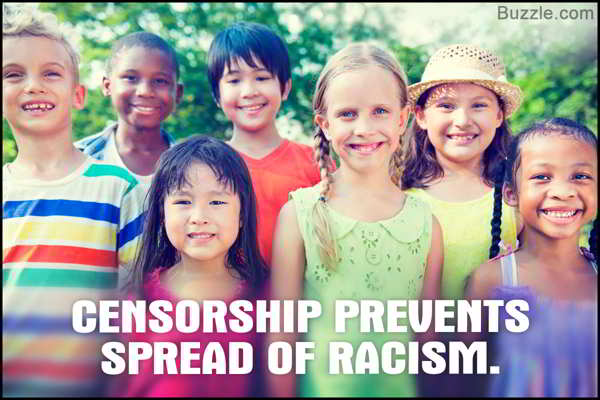 ▰ It prevents companies from spreading inaccurate or grossly exaggerated claims about their products.
▰ It promotes political correctness.
▰ Terrorists are prevented from learning about dangerous technology like the atom bomb. 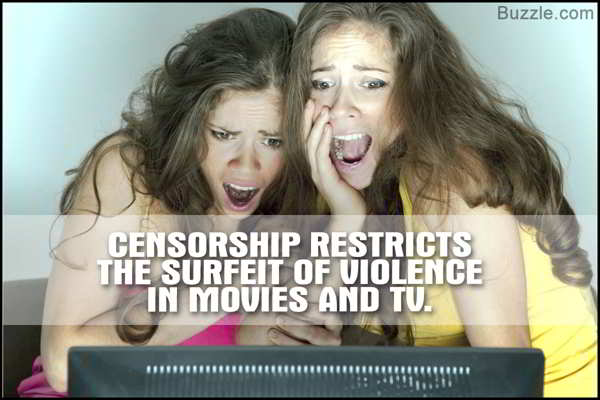 ▰ Children are prevented from learning things that could harm them and others.
▰ It prevents the ill effects of globalization affecting societies.
▰ It shields the morals of society.
▰ It restrains vulgarity and obscenity.
▰ It prevents violence by stopping the broadcast of events, which might trigger it.
▰ During an emergency like a terrorist attack, it helps in controlling panic and rumors throughout the nation. This was observed in India in 2008 when terrorists attacked The Taj Mahal Palace Hotel in Mumbai.
Cons
Censorship denies access to vital information. 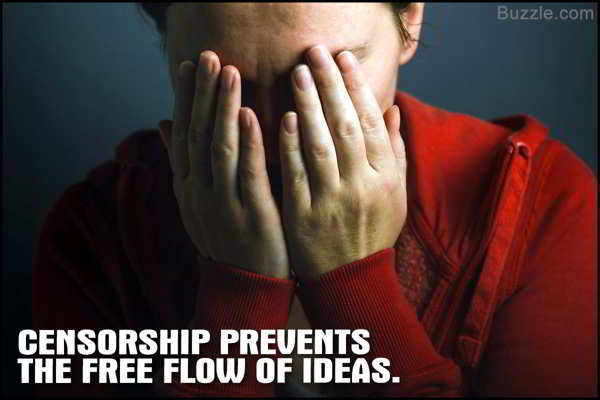 ▰ If sex-related topics are completely censored it becomes difficult to teach children and teenagers about the dangers of Sexually Transmitted Diseases and HIV/AIDS.
▰ Dictators use censorship to promote a flattering image of themselves and for removing any information that goes against them. 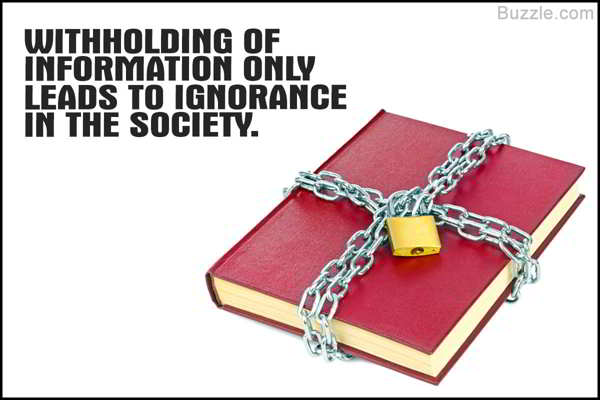 ▰ Religious fundamentalists like the Taliban use them to coerce the population.
▰ It encroaches upon the freedom of the press.
▰ Freedom of speech is compromised.
▰ It may intrude on the privacy of a person. 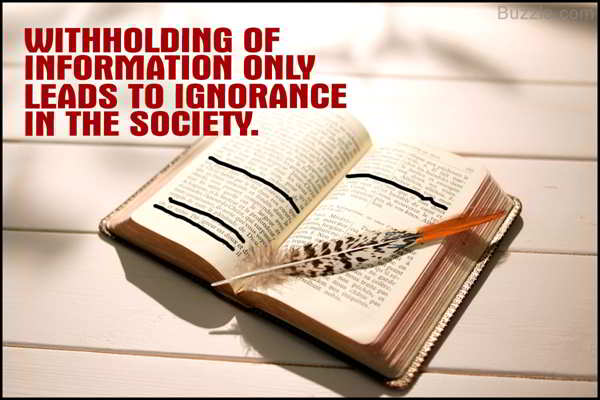 ▰ It is generally associated with dictatorship.
▰ Censoring of information may lead to a wrong image perceived by the public.
▰ Censorship has been misused in the past.
▰ It is a force against globalization.
▰ It works against creativity. 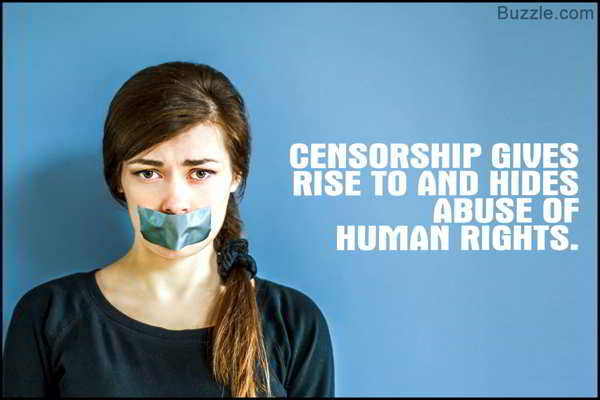 ▰ If you hide something from people they will become extra curious about it.
▰ It has no place in a truly democratic society.
▰ It is used to control people.
▰ There can be different standards of morals among different societies quite different from the imposed ones by the censorship. 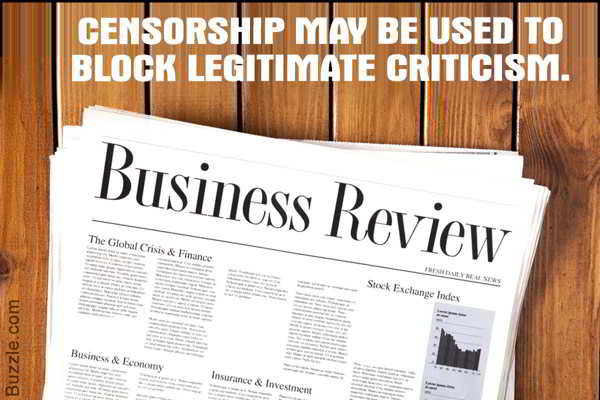 ▰ Governments should not control people. It should be the other way round.
▰ Political parties around the world use media censorship for their own benefit. It stifles the opposition, broadcasting only a particular point of view.
▰ People have a right to know.
▰ Media giants push their own agenda under the pretext of censorship.
Censorship is just like a double-edge sword. If used properly, it serves as a valuable weapon. However, it can also be misused. Censorship may have many technical and legal repercussions. Governments and other regulatory institutions must learn to use it judiciously. An absence of censorship might not be a perfect notion, however, it also doesn’t mean that the government uses it for its own personal gain by suppressing dissent. Hence, censorship should not be treated as a taboo.
ShareTweetShare
Previous Post

TV's Most Overrated Actors Who are not Worth All the Hype

A Gigantic Collection of Entertainment Cliparts and Illustrations

List of Celebrities Who Converted to Islam for Peace and Strength

Having embraced Islam, I felt as if I were born again. I found in Islam the answers to those queries...

Simply Shocking! The Most Expensive Celebrity Divorces Ever

38 Famous Celebrities You Assumed Were American, But are NOT

Top 10 Richest Actors Who are Worth a Staggering Zillion Dollars

How Celebrity Culture Affects Our Society

No Result
View All Result